The ongoing Big Brother Naija Reality TV Show took another controversial twist over the weekend as two of the contestants;  Thin Tall Tony, also known as TTT, and Bisola decided to make out in the dark under the cover of a blanket in a graphic scene that left little to the imagination of the viewers as to what they were doing.

In its few weeks of running, the show has severally been hit with allegations of promoting pornography and nudity, and what transpired between Bisola and TTT may only serve to reinforce this belief.

One thing is sure, with #BBNaija guaranteed to go home with N25m (Twenty five million Naira) and a car plus the fame that comes with such, it is expected that the housemates will try all they could using all the tricks in their arsenal to be the last man standing.

This, they must have been doing, by unleashing their sexual wiles on the house in the hope that they would attract precious viewers votes. The trio of Gifty, Cocoice, and Tboss have at different points bared their breasts to the camera although this did not appeared to have been enough to keep Gifty and Cocoice in the house.

It probably shouldn’t have made such a big splash on social media that TTT and Bisola made out, after all, they are not the first ‘Big Brother couple’ to get under the sheets for some action but what has made their case even more interesting is that TTT is married with two kids.

As much as many may try to pretend, the Nigerian society is still very much one in which people are expected to ‘come correct’ by putting on their best behaviour in public. It is therefore no wonder that many people have already taking to their social media handles to blame Bisola for making out with a married man.

"@AfroVII: Bisola is such a disappointment. I'm really sad." Don't be, maybe we didn't know her so well & thought she had standards

To whom it may concern… (Bisola). I present to you Mr & Mrs offiong Edet Anthony aka TTT .. #bbnaija #BBN #BBNigeria pic.twitter.com/9XBuP1wpRT

But should Bisola be blamed for the actions of a married TTT?

It should be noted that Bisola isn’t aware TTT is married since she earlier asked him about his marital status and neither did he give her any indication of such to make her suspect he wasn’t single. In fact, when Bisola specifically asked him during a group chat yesterday that “Are you not a single man?” he replied, “By the grace of God”.

This is despite the fact that back home, TTT’s wife, Laraba has been engaged in an online campaign for him to stay in the house. She even took to her Instagram page to share 5 real facts about her husband – including the fact that he is married “to the love of his life”. 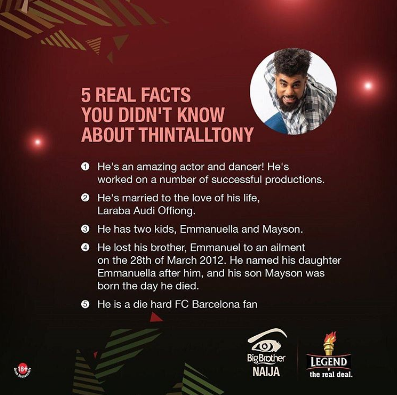 Obviously, if there is anyone to be blamed here it ought to be the man who is married but decided to lead a single Bisola on. Unfortunately, the society is wired in a way that when the issue of infidelity arises the one who gets the blame is the other woman whereas it takes two to tango.

There have been several instances where a wife confronts or attacks the woman her husband is allegedly having affairs with. There are cases where the aggrieved wife pours acid on the other woman or strips her naked instead of confronting her husband who ought to be the real culprit while society urges her on and vilify the other woman.

This world on double standards! TTT is the married one, Bisola has no idea! Yet she is the one being bashed! So unfair to women #BBNaija

It is obvious that putting people with very different backgrounds in the same environment for long periods of time has a 100% chance of causing drama. People love drama, so they watch it. It sells. It’s all about money… But what about their lives after they lose out? Would they be able to live with the consequences of their actions in the house?