Controversial on-air-personality (OAP), Daddy Freeze has stepped in to share his own view on Christmas Celebration as Christians all over the world are celebrating. 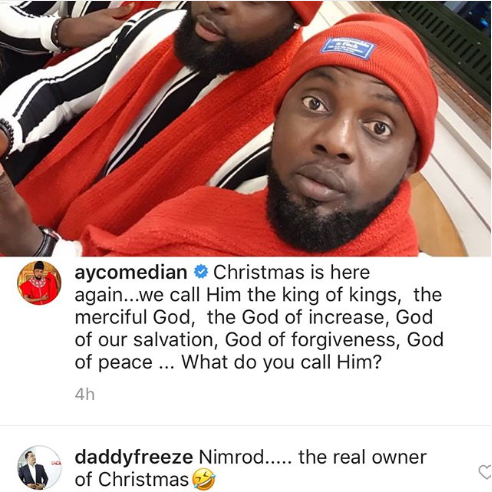 According to him, Christmas is a pagan festival and has nothing to do with Christ.

He said this while reacting to a festive post shared by AY.

AY posted a photo of him and his brothers in matching outfits and shared it with a caption that spoke about Christmas and Christ.

Freeze replied him, saying, “Nimrod”, is the real owner of Christmas”.

“Nimrod, Odin, Saturnalia, Horus, Tammuz, Sol Invictus, the winter solstice and paganism are the real reasons for the season.
–
Christmas has nothing to do with either God or Christ?
–
“Nimrod started the great organized worldly apostasy
from God that has dominated this world until now.
Nimrod married his own mother, whose name was Semiramis.
After Nimrod’s death, his so-called mother-wife,
Semiramis, propagated the evil doctrine of the survival
of Nimrod as a spirit being. She claimed a full-grown
evergreen tree sprang overnight from a dead tree stump,
which symbolized the springing forth unto new life
of the dead Nimrod. On each anniversary of his birth,
she claimed, Nimrod would visit the evergreen tree
and leave gifts upon it. December 25th, was the birthday
of Nimrod. This is the real origin of the Christmas tree.”
-The Plain Truth About Christmas
by David J. Stewart | December 24th, 2005 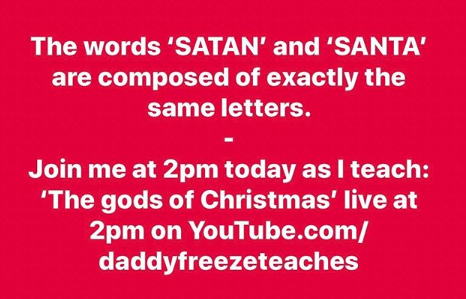 SEE ALSO: TOP HONOUR: Super Eagles Trio Nominated For 2018 CAF Player Of The Year Alongside Salah, 31 Others [SEE FULL LIST]
Do you have a story you care about or is there an issue you want Thesheet.ng to look into? Email your story ideas or suggestions to us at editor@thesheet.ng.
If you wish, you can also send your stories, pictures and videos to our
Whatsapp number:  09098070080
or any of our Social Media platforms:
Facebook: Facebook.com/Thesheetng
Twitter (tweet at us or DM): @thesheetng
Instagram: @thesheetng
This is a 2018 Copyright of thesheet.ng. You may wish to request express approval from thesheet.ng to republish.