Just a few days after setting world history as the first African female artist to win the award for Best African Act 2018, Tiwa Savage has added another feather to her already brimming cap.

The singer recently took to her Instagram to casually announce that she was featured on the December edition of British Vogue.

In the feature, Mummy Jam Jam as she is fondly called, revealed certain salient details about motherhood and the evolution of her music from her immediate local environment to the global stage.

Tiwa Savage reminisced about buying her very first record titled Salt and Pepa. The song was actually recorded on a tape which had to be rewound back and forth while it is being listened to.

READ ALSO: ‘Your Relationship Doesn’t Have To Make Sense To Anyone’ – Tiwa Savage Speaks Amid Raunchy Video Controversy [SEE]

Tiwa also detailed why she had to move back to Nigeria to start her music career.

According to her, it would take a question from producer BabyFace for her to notice the lack of formidable women in the music scene back at home.

“Suddenly I realised there was something happening: that there were musicians like D’banj and P-Square making African music, but there were no females doing it on the same level,” she said.

In Nigeria, she honed her music and made ssure she had one main element: that she is an African woman.

“In everything I do – whether it’s using my native language, or an African beat – something is going to let you know I am an African woman”.

“Against all advice – everybody was like, nobody is going to listen to African music, I moved back to Nigeria.” 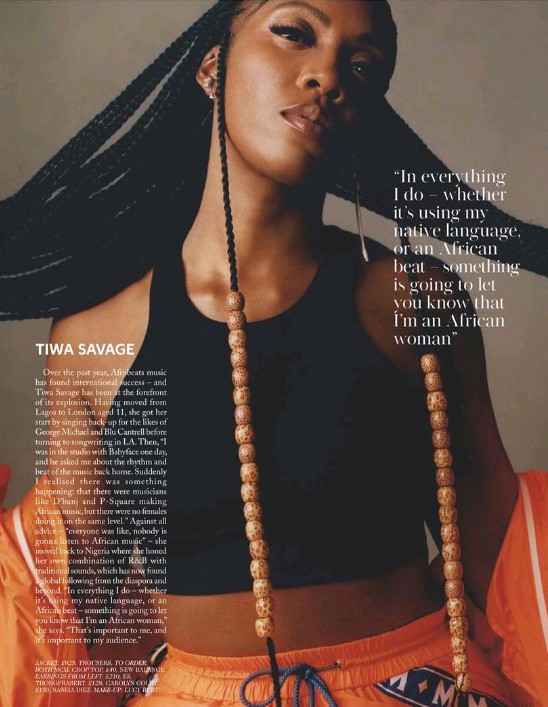 The Mavin recording artiste, stressed the need to respect women who are mothers, especially the ones who combine that role with work.

“Honestly, when I see women that are mothers, I am always always inspired, especially mothers that work and still take care of their babies because I know how hard that can be,” the mother of one said.

Savage, who just released a Killertunes produced single ‘One’ is at the “forefront of the Afrobeats explosion” according to the British Vogue in an IG post that acknowledges her reach.

“In everything I do – whether it’s using my native language, or an African beat – something is going to let you know that I’m an African woman.” Meet @TiwaSavage: the woman at the forefront of the Afrobeats explosion, and whose hybrid musical sound is going global, via the link in bio.