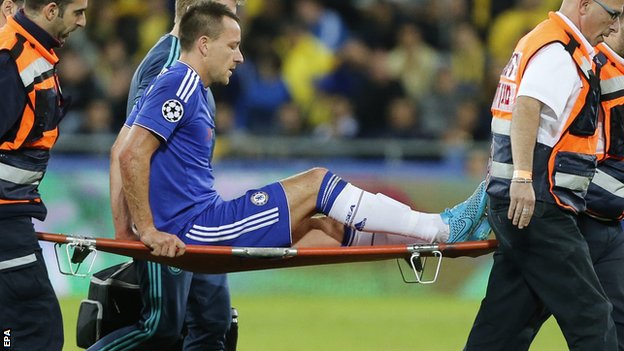 Chelsea coach, Jose Mourinho has revealed that John Terry is a big doubt for the  trip to White hart lane on Sunday after the centre-back suffered an ankle injury during Tuesday’s 4-0 win over Maccabi Tel Aviv.

The Chelsea captain appeared to injure his ankle after falling awkwardly in a challenge with Gal Alberman and was replaced by Kurt Zouma in the 72nd minute after leaving the field on a stretcher.

“Of course he is [a doubt],” Mourinho told BT Sport after the match.

“I don’t want to speak without tests when we’re back in London, but I think he’s a big doubt.”

SEE ALSO: I Am So Good That Manchester United, Arsenal Fans Would Love To Have Me In Their Team- Chelsea Defender, John Terry