TMZ reports that rapper Lil Wayne has just been kicked out of his chattered private jet because he and his entourage lit up their joints minutes after the pilot took off.

He had reportedly asked the pilot to permit them to smoke during the flight and pilot disagreed, but Lil Wayne disobeyed that flight rule, prompting the pilot to turn back the plane and return to the tarmac the had just taken off from.

But this is not the first time he’d having issues with pilots.

In 2013, he boarded his chartered jet with a Styrofoam cup filled with the dangerous drink sizzurp (a purple concoction made from codeine and other drinks) and he suffered a stroke and went into seizure midway during their flight.

As they disembarked from today’s cancelled flight, paps spotted him holding same Styrofoam double cup which sources confirmed to TMZ was still filled with same poison. 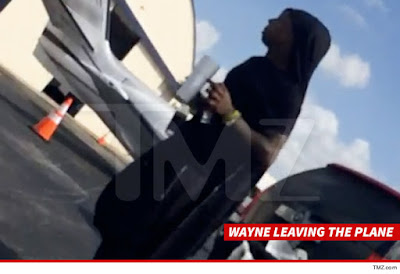