Akeredolu polled 244,842 votes in the Saturday’s election as against his closest rival, Eyitayo Jegede of the People’s Democratic Party who garnered 150, 380 votes.

He has since embarked on a victory train across Akure in the company of Minister of Solid Minerals and ex-Ekiti State governor, Kayode Fayemi. 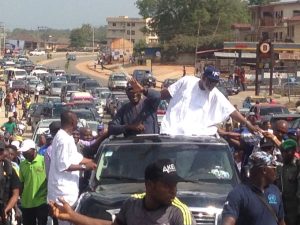 Below are 10 things you should know about the Ondo State governor-elect:

1. Akeredolu was born on July 21, 1956 to Ola Akeredolu, a reverend and Grace Akeredolu, a lady evangelist, Aketi started his primary education at Government School, Owo.

3. He later gained admission into the University of Ife (now Obafemi Awolowo University) to study Law, graduating in 1977. He was called to the Nigerian Bar 1978. 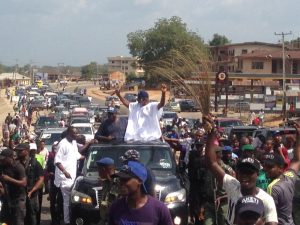 5. Rotimi Akeredolu became president of the Nigerian Bar Association in 2008.

6. He became the NBA president 20 years after being called to bar.

7. In November 2009 he faced allegations of corruption when the Bar Association’s Third Vice-President, Welfare Secretary and Assistant Financial Secretary circulated a petition entitled “Complaints against your fraudulent manifestations, violation of the NBA”. Subsequently, the allegations against him were reviewed and dropped by the National Executive council of the Nigerian Bar Association. 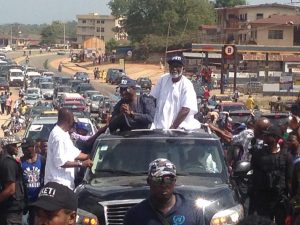 8. On 28 July 2012, On Akeredolu was selected as the Action Congress of Nigeria (ACN) candidate for Governor of Ondo State during the ACN congress in Akure.

9. On Saturday September 3rd, 2016, he won the sole ticket to represent the All Progressive Congress (APC) at their primary conducted in Ondo State to represent the party at the forth-coming 2016 elections.