Reports say there are imminent plans by the new authorities led by Akinwunmi Ambode to prosecute those involved in the alleged hike of contract figures during the immediate past administration.

Sources in Alausa yesterday said that officials involved in the award of the contract of the N78 million upgrade of the website of the former governor are among those to be prosecuted.

The Lagos State Government spent N78.3m to upgrade the personal website of former Governor Babatunde Fashola between 2014 and 2015, according to a report by the Lagos Public Procurement Agency. 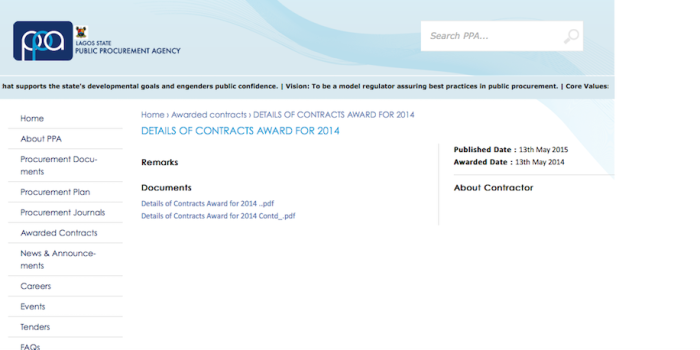 It will be recalled that Fashola in a statement last week, denied the allegation, comparing his accusers with pigs who get “happy” when they get you “dirty.”

Reliable source says “such a response from the one time respected Tunde Fashola is too pedestrian but the government of Akinwunmi Ambode is set to prosecute those found culpable, how can you upgrade a website for 78 million?”.

“The website upgrade is one area that exposed the number of inflated contracts during the regime of Tunde Fashola and most of those contracts will surely be probed” he concluded.

Meanwhile, there is growing tension in Lagos as Fashola is launching three books today, they include The Great Leap, a book written by Mr. Hakeem Bello, who served as Special Adviser on Media to Fashola and two others co-authored by Dapo Adeniyi.

The other two are: In Bold Prints: Thoughts of Babatunde Fashola and Lagos Blow Down: West Africa’s First Controlled Demolition.

It is however not clear the content of the books but the camp of the former governor and leader of the APC, Bola Ahmed Tinubu is unsettled as the Jagaban will not be attending the launch according to insiders.

It is alleged that Tinubu, Fashola’s political benefactor was not invited for the launch and he Fashola since handing over power has refused to pay a visit to Tinubu but for sources in the Fashola camp, the story is false as he Tinubu is the one who has refused to answer all phone calls from Fashola.

An insider in the Fashola camp said, “trouble started when he (Tinubu) was assuming that President Buhari was going to nominate Fashola as a cabinet Minister for Lagos State, shortly after he travelled with him”.

When asked why trouble started, the source who does not want his name mentioned in this report said, “Tinubu wants his own candidate and not Fashola, who do you think is trying hard to expose Fashola in the media?”. he questioned.

“As it is, no one knows what Buhari wants, running Fashola down in the media because of an appointment will do no one any good but time will tell; he added, I have no idea about the contents of Fashola’s book, if you want to know, I advise you attend the launch” he concluded.