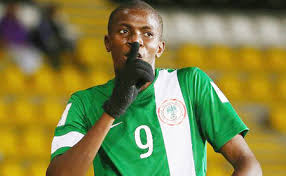 Watford striker and Nigerian international, Odion Ighalo has praised the impact of Nigerian starlet, Victor Oshimen, ahead of Nigeria’s Fifa U17 World Cup final with Mali, saying the youngster has every quality to make history.

Oshimen has scored 9 goals to equal the tournament’s all-time record held by Florent Sinama Pongolle and Souleymane Coulibaly. One more goal against the young Eagles of Mali and the 16-year-old would rise above all his peers.

Ighalo, a former Nigeria youth international and now an important member of the Super Eagles, believes we are witnessing the birth of a new football star.

“He’s a good striker, he’s young, he’s sharp, he has speed, he’s a good finisher and I hope he makes history,” Ighalo, who has scored seven goals in the English Premier League revealed.

“I’m wishing him all the very best and he should remain humble, he will rule his generation.”