Reports are that private tertiary institution, Reedeemers University, has suspended 22 students for not attending church.

According to a source in the school, “even a student that didn’t go because she has asthma attack was suspended, they are to be suspended till next semester effective from tomorrow there by causing them to miss their first semester exam”

A mail sent by the source partly reads;

I highly doubt that Pastor Adeboye knows about this victimization, the rule book states that failure to go to church attracts points been deducted (if student doesn’t give a valid reason) not students been suspended, how can a parent waste almost 400k because the child did not go to church for a day, even the girl with the asthma attack had an attack right there and they still suspended her.

This so called potters and administrators take laws into their hands and victimized students out of envy (sometimes) and just because they know they can. A few months ago i heard a students phone was seized by a potter because she had long natural nails.. Imagine that.. In a University.
I know this because my husbands sister attends the school. We are here so upset and will be heading to the school tomorrow..Admist pleading and shedding of tears the students had to pull out their handbook to see the penalty for their supposed “OFFENSE”, they showed it to the potters and admin staff responsible for the suspension and their response was “YES we know the rules but we want to make you all scape goats”.

What do you guys thinks about this? 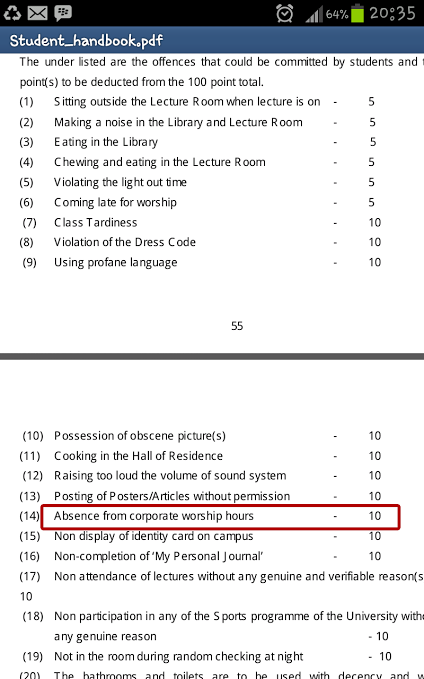