Looking back at where Nollywood is coming from, going by the quality of the scripts and the acting prowess of the actors and actresses back then, I must say that Nollywood has been on a steady decline.

I mean, we have had great movie producers like Kenneth Nuebue, Tade Ogidan, Tunde Kelani, Chico Ejiro etc. They consistently churned out really good movies during their prime, unlike what we have today.

It seems like Nigerians criticise Nollywood too much but trust me, when you see these 10 Nollywood classics, you will know that they can do better.

This movie was produced by the brilliant and meticulous Tunde Kelani, fondly called TK. I won’t say much about it but you surely should see the brilliance of TK in display in this movie. Go watch it!

And we bring Liz Benson back! This movie practically turned the star actress into a Dracula with a heart of stone. The eerie noises, those long nails (that could pass for hand fans), the sheer deliciousness of the evil. Kai, Liz Benson could act!

Though the moon was looking like a disco ball and the eagle was like something carved out of wood, Regina Askia was still on the top of her game. Possessed by the ‘moon spirit’, she became the stuff of nightmares, that still give us the shivers even as we pen this down. I included this particular movie because it is more personal to me, and I remember crying uncontrollably at some point in the movie.

My love, is a love story of a girl from a rich home and a guy from a wretched background (Ramsey Nouah) and their love was severely tested because of the huge gulf in the social status of both families. I recall there was a time Ramsey Nouah was taken away by thugs and thrown into a very deep pit or hole dug somewhere in the middle of nowhwere.

Ok, thats enough, you should go watch it! 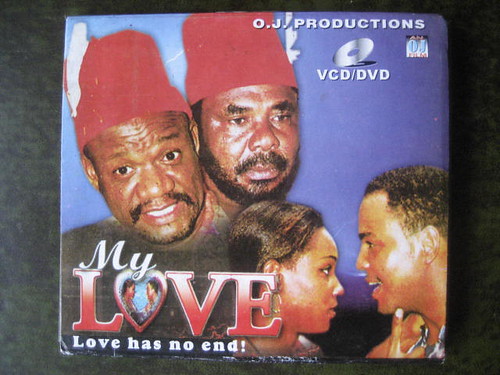 After this movie was made, Kanayo .O. Kanayo became the man known for acting in money-ritual films. Who can forget that scene where a boy was turned into a chicken when he picked up money from the floor and carried away for rituals? Many parents used that part of the movie to instill fear into the hearts of their stubborn children. Don’t take money from strangers!

The inimitable Liz Benson was transformed into a fierce ghost, killing almost everyone who stood between her and her ‘Precious’ diamond ring. Not forgetting Bimbo Akintola whose tear ducts never dried throughout the movie. This hair-raising movie, directed by Tade Ogidan, was simply one of a kind. Ogidan is a god. Like the name rightly explains, this movie is a powerful movie every one should see. It stresses the depth of God’s power and it is quite scary too. I cannot really narrate the moive trust me, because it is part 1-9 so…. I think you should just see it.

Ok, let me scare you a bit… do you remember Bose chanting “a yaaaa ma tan gaaaa?” Lol…

This movie powerfully announced the presence of Mount Zion Ministries to the world and they have since grown from strength to strength, making Christian movies in the UK, US and around Europe.

The movie which was produced by Sunny Collins and directed by Chico Ejiro was released in 1998. In the movie, Sade who was rejected by her in-laws after the death of her husband, hit the streets with her two sons. But this journey was marred by insecurity, death and poverty.

Everyone remembers where they were when they first saw Igodo, this all-star, menancing blockbuster that tested the horror threshold of Nigerian audiences. 7 brave men of different vocations are chosen to venture into a deadly forest to save a doomed community from the nefarious actions of their fore-bearers. In retrospect, Igodo’s cheap looking special effects are quite cringe inducing but none can deny that the film took the horror/thriller genre to new heights.

Kenneth Nnebue’s classic probably does not age as well as we may have liked but it is near impossible to compile a list of Nollywood greats without throwing it in somewhere. Why? Living in Bondage started the whole contemporary film culture and birthed a fresh generation of film stars that would go on to do great things on stage, television and film. The story of the luckless Andy who uses his virtuous wife for money making rituals remains as unforgettable as it has been defining.

We still have a host of others that have not been mentioned like Dangerous twins, Oleku, Ijele, Saworoide, Thunderbolt, Conspiracy etc but… these ones stand out abeg!

SEE ALSO: Manchester United Was A Huge Education For Me – Cristiano Ronaldo