Presiding Pastor of Zionwealth of Life Assembly in the Lekki area of Lagos State, Apostle Chris Omatsola has admitted he had a sex tape video with his former lover, Tamaratokoni Okpe but denied his involvement in the release of the Video online.

The Lekki based pastor has been accused by Okpe of releasing the video to Blackmail her because of her decision to quit the relationship.

It was gathered that the two estranged lovers dated for about seven months in 2018, during which they had sexual intercourse, which was filmed. 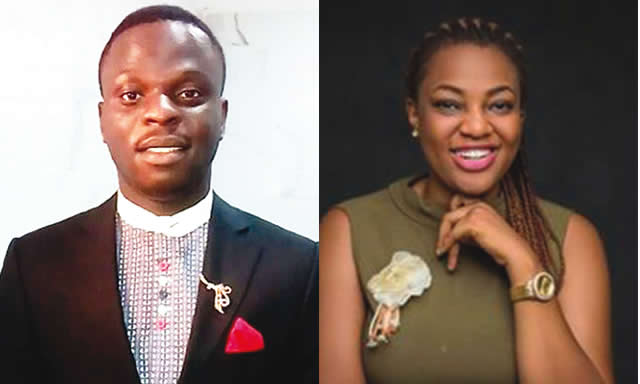 However, shortly after things fell apart between them, the lurid video emerged on the Internet. Okpe, in her account of the incident, said the pastor had threatened to leak the video after she quit the relationship.

READ ALSO: ROYAL ROMANCE: The Back Story Behind How Ooni of Ife Met, Wooed And Married His New Prophetess Wife [CLICK]

She said, “I met Apostle Chris Kevwe Omatsola, the founder and pastor of Zionwealth of Life Assembly (Zola) in Lekki, Lagos, and we started dating in February 2018. It quickly escalated to a sexual relationship and when we had sex the first time, he told me that we should make it right by getting married. We continued our romance and one of the things we did together was recording videos and taking pictures of our intimacy.

“I informed my mum about a guy coming for my hand in marriage and she said she was going to pray about it. Everything was rosy until he became violent and constantly beat me up till I bled. He came begging after each episode and I forgave him.” She said by July, she had become indifferent about the relationship. Okpe alleged that the cleric’s temperament and constant assault of her also discouraged her.

“In August, I called off the relationship and I was surprised that he accepted it in good faith initially, given his penchant for violence. “Sometime in August, he asked that we meet to talk on platonic grounds. During the meeting, he became hostile when he realised that I was no longer interested in him. He also refused to drop me off at home. He beat me up, seized my phone, forced me to unlock it and retrieved contacts from it just to track who I was seeing.

“That was the final straw for me; so I never saw him again till September when he showed up at my place, crying and begging. I refused to fall for his tricks and there was no further communication from both sides till sometime early October when he apologised again. “On October 13, he contacted me with an anonymous number via WhatsApp with pictures, videos and threat messages, saying if I did not come back to him, he was going to release everything,” she added.

She noted that she was surprised when at 7 pm that day, people called her attention to the nude video and pictures circulating on the Internet. The Computer Science graduate said the case was reported to the police and Omatsola was arrested the following day.

“He said now that my pictures and videos were out there, no man would want to look my way again; that it was best we got married.

“After the arrest, in the presence of his dad, he confessed to releasing the pictures and video. He apologised to me, my family, his family and the public. This was recorded on October 19, 2018, and I am in possession of the video. He even accepted to pay damages,” she said. Okpe, who noted that she regretted the relationship, said she had faced ridicule from friends and family members.

“I was wrong to have been involved in premarital sex with a pastor. I was wrong to have allowed him to persuade me to record our intimate moments. I have been fielding questions from my colleagues. I hope that this will pass soon,” she added. When our correspondent contacted the cleric, he said his former lover was out to fleece him, adding that he could not have posted the sex video since he had his reputation to protect.”

READ ALSO: GHEN GEHN! ‘Iceberg Slim And Juliet Ibrahim Were Both Irresponsible While They Were Dating’ – Nigerian Filmmaker Charles Novia [SEE WHY]

He added that the second video of him confessing to posting the sex video was done under duress. He said, “I never did anything of that nature and she does not have anything to prove it (assault). How do you, a popular pastor with a church in Lekki Phase One, leak your own sex video with your face on it? How does that work?

“That video (confessional video) was done under duress because I was picked up by the same lady and she demanded N200m (from me) for leaking the video, which I did not leak. She has it on her phone and I have it on my phone. So, she picked me up. My dad and the lawyer agreed that I should do a (confessional) video and it was under duress. “The police were there, the Investigating Police Officer was there; I am supposed to pay that girl N1m before the end of this month.

“This (sex) video came from an unknown telephone number. I started getting calls on Sunday morning while I was in church and somebody said my sex video was all over the Internet. I called the blog that posted it to take it down. “The next day, the police came to arrest me for it. I went to the station and I was detained; my lawyer came to take my bail. I was taken to the police headquarters where I was told that part of the conditions for bail was for me to make that (confessional) video. I needed to do it to come out to defend myself. You can’t defend yourself in a cell.”

The Lagos State Police Public Relations Officer, CSP Chike Oti, said an investigation was ongoing. He noted that the police were not aware of the financial settlement claimed by Omatsola. He said, “A case was reported against the pastor who posted a sex video of himself and his girlfriend online. An investigation commenced at the Ajah Police Station and the pastor made a confessional statement that he posted the video. He said he was madly in love and that was why he misbehaved.

“However, because we see it is a case debasing womanhood and betrayal of trust, it was moved to the Gender Section for thorough investigation.

“At the end of the day, the man was granted administrative bail, while an investigation continued.

“Take anything coming from that man with a pinch of salt because we have established that he is a liar and an imposter. We have established that he has committed a heinous crime against a woman that once loved him. If he could commit the offence against the woman, lying against the police is a piece of cake for him. The confessional video he claimed that he was forced to make was done in the comfort of his car.”