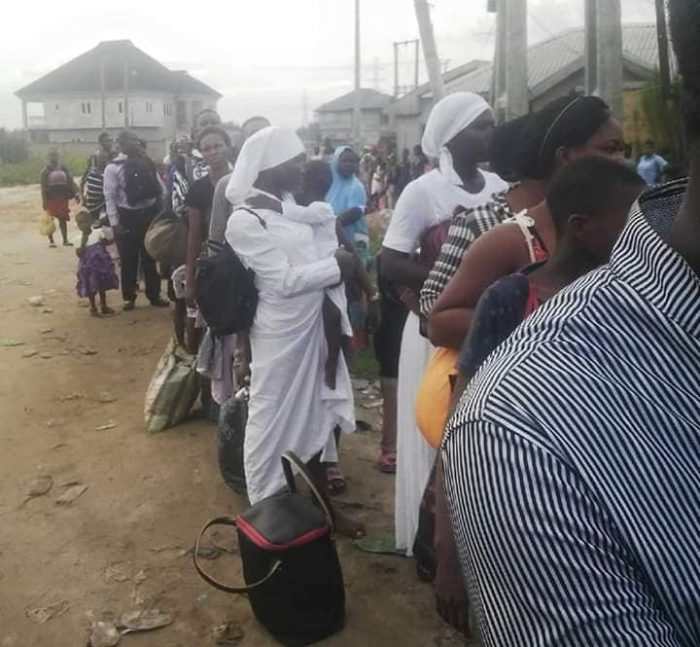 Residents of Abonnema community in the Akuku-Toru Local Government Area of Rivers State, have begun leaving the once peaceful area in droves after the killing of two soldiers on Saturday.

According to reports, the soldiers who have been in the region since the presidential and national assembly elections, were killed by unknown gunmen who allegedly carted away their rifles.

The residents, who have been filled with fear over reprisal attack by the military, were seen leaving the community this morning.

Meanwhile, some women of Abonnema community on Saturday staged a protest to condemn the killing of over 35 of their children during the presidential and National Assembly elections on February 23.

READ ALSO: DYNASTY! How Tinubu Is Positioning His Son To Take Over Lagos in 2023 [OPEN]

The women, who marched round Abonnema town, warned that military personnel should not be deployed in the area in the governorship and state Assembly elections billed for March 9.

The women appealed to the King of Abonnema to help restore peace back to the town, stressing that “Abonnema used to be a peaceful community.” They enjoined the king to caution the ruthless display of “federal might” by some members of the community.

“We plead with you to talk to our sons who are today enjoying the federal might to use it for the betterment of their community. Some other persons have also held those positions; they used it to better their LGAs. We are pleading: We expect them to use whatever they enjoy today to better our lives.”

SEE ALSO: CITIZENSHIP! Why Atiku Is Not Eligible To File Petition To Challenge Buhari’s Victory- Ajulo [SEE]
Do you have a story you care about or is there an issue you want Thesheet.ng to look into? Email your story ideas or suggestions to us at editor@thesheet.ng.
If you wish, you can also send your stories, pictures and videos to our
Whatsapp number:  09098070080
or any of our Social Media platforms:
Facebook: Facebook.com/Thesheetng
Twitter (tweet at us or DM): @thesheetng
Instagram: @thesheetng
This is a 2019 Copyright of thesheet.ng. You may wish to request express approval from thesheet.ng to republish.