US Vs Iran: Trump Calls Out Opposing Democrats

Beautiful! Sandra Ikeji Shuts Down Lagos with Her 200 Bridesmaids

Neymar Blames Self, Others For 3-3 Draw Game

Iraq Attack Iran’s Illegal Missile Attack On US base

Iraq Speaks On Bomb Attack On US Troops By Iran 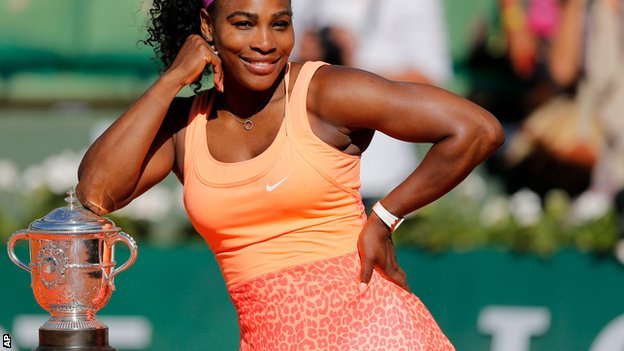 Serena Williams won her 20th Grand Slam title and third French Open crown at Roland Garros on Saturday, clawing her way back from a break down in the last set to defeat Lucie Safarova 6-3, 6-7 (2/7), 6-2.

Victory at Wimbledon in July would see Williams hold all four major titles at once, having managed the feat already in 2003.

There had been doubts over whether the 2002 and 2013 French Open champion would even make it to court for Saturday’s final after a debilitating bout of sickness.

Williams had visibly struggled in Thursday’s semi-final, coughing and looking close to tears, and then cancelled all media commitments, only practising two hours before the final.

The rest appeared to have had the desired effect as she took the first set with a break in game four and powered on in the second.

She had won all eight matches she had played against Safarova and, serving at 4-1, 40-15 in the second set, there appeared no possibility of the American faltering.

However, three double faults in the game brought Safarova unexpectedly back into the contest, and the Czech kept herself alive again four games later with a backhand winner.

Safarova, 28, was now much the sharper in terms of footwork and she dominated the tie-break before moving ahead with a break at the start of the decider.

Williams was now struggling to keep calm, screaming at herself after errors and picking up a warning for her language from the umpire, but she proved once again why she is the undisputed number one.

Safarova double-faulted for the first time in the match to bring Williams level at 2-2 and the top seed ratcheted up the pressure.

Another heavy return helped her break for 4-2 and a left-handed forehand followed in the next game as Williams reached for every shot in the book, sealing victory with her seventh break of the match.

Neymar Blames Self, Others For 3-3 Draw Game